Signature of Memorandum of Understanding

HomeHírek Signature of Memorandum of Understanding 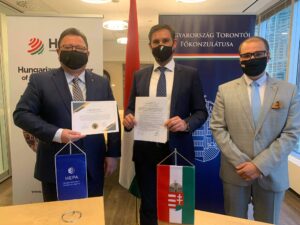 By signing the document, the partners have agreed to work in cooperation towards the business development of Hungarian companies within the Canadian and American markets. The two parties are also committed to bolstering the Hungarian market, as well as participating in relations that will promote economic and trade collaboration between Canada, the United States, and Hungary.

At the ceremony – moderated by dr. Miklós Gór-Nagy, Foreign Trade Attaché in New York – dr. Mária Vass-Salazar, Ambassador of Hungary in Canada, István Pásztor, Consul General in New York and Valér Palkovits, Consul General in Toronto, welcomed the participants and the initiation. In their speeches, the chairs of AmHunCham and HCCC, Tamás Barát and Sándor Balla also emphasized the importance of the Memorandum of Understanding and were looking forward to future joint events and collaboration.